And we have completed the list, with a whopping 91 species!

For the story, I will start where I left off, at Carburn Park. There were a pair of Common Goldeneye swimming around in the pond, and a Downy Woodpecker was hammering away at a nearby tree. As we strolled down the trail, a rising cacophony of sound swirled around us. After looking for a while, we identified it as a large group of about 100 Tree Swallows, not over the water, as you would most often see here, but actually in the trees themselves! Soon thereafter, a large span of the Bow River appeared through the trees. Once we arrived there, we scanned the sky for an Osprey or possibly a Bald Eagle. Seeing nothing, our eyes dropped down to the river, where we found three Common Mergansers, and 2 Mallards. We were just about to head into the inviting spread of woodland ahead, when Tommy spotted an Osprey circling the sky above! We watched the Osprey until it disappeared over the horizon, at which point we turned back towards the forest, which was full to the brim with birdsong and activity. On our first step into the wood, we were stopped by a bright group of 3 male Western Tanagers in full mating colors.

Almost immediately, Tommy put a hand up and asked if we could hear something in the mix of song – a Least Flycatcher! Further ahead, we spotted a Blackpoll Warbler among both Myrtle and Audubons Yellow-rumped Warblers. 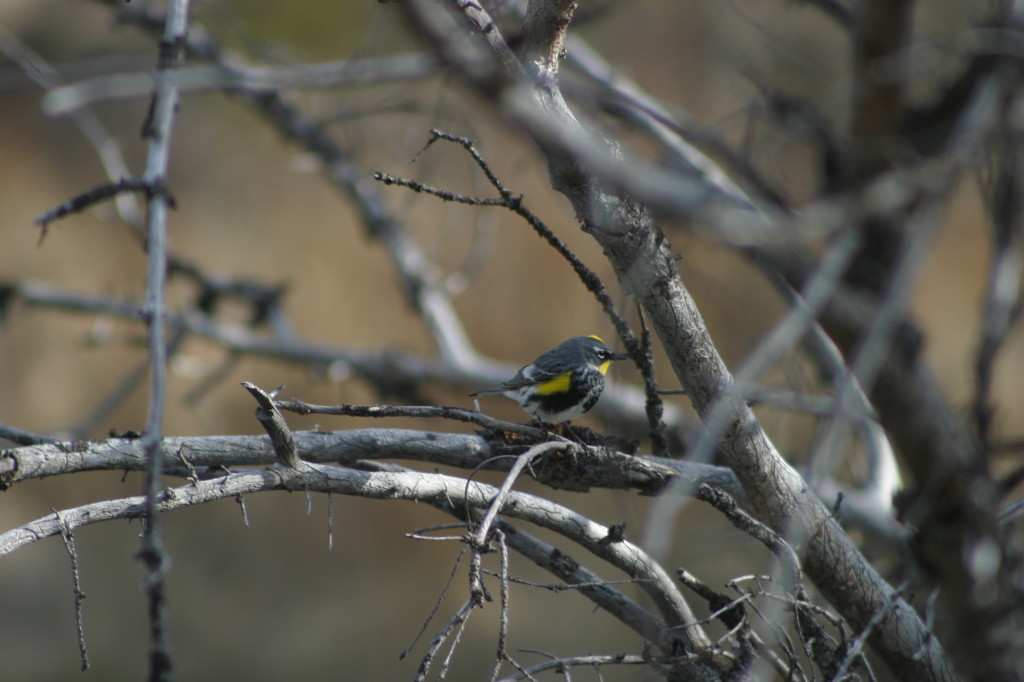 Nearing the end of the walk, I thought that I’d seen a Wilson’s Warbler, but I didn’t get a clear view and we coudn’t find it again, so we didn’t count it. Some Franklin’s Gulls flew by, their voices harsh against the clear afternoon sky, while a White-breasted Nuthatch crawled up and down a tree in the classic Nuthatch style.

Seeing nothing else new, we decided that it was time to move on, so it was back to the car and on to Weed Lake. Weed Lake, for those who don’t know, is usually a great birding place, and it certainly fulfilled my expectations! We saw a multitude of ducks, including Ruddy Duck, Redhead, Lesser Scaup and Cinnamon Teal. Swimming nearby, Eared and Horned Grebes splashed.

Afterwards, we continued down to two different sloughs around Calgary. At the first one, we saw a lot of shorebirds: Marbled Godwit, Willet, Killdeer, American Avocet, Black-necked Stilt and Semi-palmated Sandpipers. Swainson’s and Red-tailed hawks circled above, while a Northern Harrier swept over the lower parts.

The second also produced a fair number of waders, but others as well, with the 2 Willets being the only non-new species! There were eight Lesser Yellowlegs, and 3 Pectoral Sandpipers. Two Mourning Doves sat on a wire, not straying too far from the equal number of Eurasian Collared-Doves on an opposite power line. Driving out, we were halted by another bird on a wire – Western Meadowlark!

I had convinced my Dad to get up at 5:45 (a thing he rarely – if ever – does!), and so we got down to the local boardwalk, where we added two more species to my list: Orange-crowned Warbler, and Common Yellowthroat. Our time there was limited, as we had an appointment in Banff at seven. Arriving at the Martin Stables, the birding started instantly, with Yellow-rumped Warblers flitting through the trees in the parking lot. Stepping out of our car, we were greeted by a boisterous Sora, screeching out from the marshland in front of us. Passing under a wire, we got exellent photos of the three types of swallow perched there.

As we rounded the stables, there sat a Wilson’s Snipe, on a tussock of grass. I was just putting my binoculars to my eyes when a Wood Duck called from somewhere out in the swamp. Swinging around, I searched for it, but got not even a glimpse. We turned and headed down the simple trail to an open bit where we could see the water – and the birds of course! There was a Northern Shoveler, six Bufflehead, two Green-winged Teal and a Red-tailed Hawk to name a few!

A Savanah Sparrow sang from a nearby tree as we turned back to head somwhere new.

Leaving all others to their own, we cast out on an mission by ourselves. We had to hop over little bits of path that had been flooded out, but still were able to bird while doing so – except for the risky leap over a muddy stream from the end of a sunken log! We identified Yellow-rumped, Blackpoll, Wilson’s and Yellow Warblers. There were also a few kinds of sparrow, mainly White-crowned and Savannah and Chipping but there were some Lincoln’s, and an amazing Swamp Sparrow.  At this point, thanks to Jason for both joining us early, and correctly identifying the Swamp Sparrow – a lifer for me.

Near the end, a Townsend’s Warbler just managed to stick itself into my time.

And last (but not least) I’d like to thank all of my sponsors who have donated to my birdathon!

4 thoughts on “My Baillie Birdathon Experiences 2014”