Back from Texas, and after two weeks, I’ve finally gone through all 8,000 photos to pick out a few of my favourites. This is more of a photo post, as it would be too extensive to try to describe each place we went and bird we saw, but I will add a few notable locations.

Thanks to the gracious generosity of some Canmore friends who own a house in Houston and were willing to share, we were able to book this trip for a week during spring migration. For any who haven’t yet been, Texas is a wonderful place, and it should definitely be on your agenda for the future. With that said, let’s dive in.

You can see why it’s called a Spoonbill! These colourful birds we first found at a Marsh on the Texas coast near Hitchcock. The marsh was filled with birds, and we picked up quite a number of lifers there.

Tricolored Herons, Little Blue Herons and Reddish Egret were all present, and Terns swept across the reeds.

The second day was mostly concentrated between two excellent sites, Brazos Bend State Park and Quintana Neotropical Bird Sanctuary. A lot of driving for two locations, but the four hours at Brazos Bend were especially rewarding.

It was here that we finally picked up a long-term nemesis, the American Bittern.

It lurked in the marsh alongside a White Ibis, Little Blue Heron and American Alligator.

Starting early at Laffite’s Cove, we moved on to Bolivar Peninsula and eventually ended up in High Island, a salt dome known for its birding hotspots.

The songbirds at Laffite’s Cove were quite good, though not as good as it sometimes can be. We picked up another nemesis here, the Black-throated Green Warbler. Now it seems that we don’t have one! Bolivar Peninsula turned up thousands of Terns – Common, Royal, Sandwich and Least.

We also found several plovers, including (distant) Wilson’s, Snowy and Piping. Naturally the only one which came close enough for a photo was the Semipalmated, but still a great bird to see.

At High Island, we found lifer Wood Thrushes, and after an unsuccessful chase for an ABA rare Fork-tailed Flycatcher, we located a late pair of Whooping Cranes.

We took a quick trip south to Corpus Christi, an interesting geographical place in terms of bird species. Many species’ ranges come up from South America and end there, just shy of where we were located in Houston, so it was a superb little outing.

Later that day, a return trip to High Island brought up Louisiana Waterthrush, Yellow-throated Warbler and Swallow-tailed Kite before we found Eastern Wood-Pewee, Prothonotary Warbler (See our amazing find in Canmore) and a lurking Green Heron at the rookery of hundreds of egrets, spoonbills and herons.

For the final half-day before returning to Canada, we spent some time in a Houston sanctuary, hitting Swainson’s Warbler, Blue-winged Warbler and Barred Owl before an extremely kind woman offered to show us a nesting Eastern Screech Owl in her backyard.  I’m going to insert a couple of my favourite photos that I hadn’t had a chance to add previously here.

A Pied-billed Grebe turned up on Policeman’s Creek and stuck around long enough for a few good photos. In other news, we leave for Texas soon! Keep your eyes peeled for updates on Reddish Egrets, Green Jays, Caracaras and more as the trip progresses.

A couple photos from a recent trip eat of Calgary – we got a GGOW, 5 Snowies, 10 Shorties and a Long-eared! 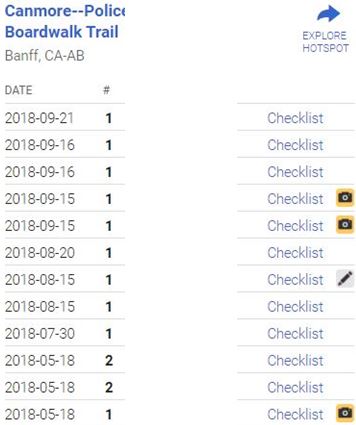