July 19th, 2017. We had stayed in Medicine Hat for the night, having come in from the bountiful prairies of Southern Alberta. So far the count was at 5 lifers and 2 other Alberta firsts, with other highlights including many Ferruginous Hawks, some Baird’s Sparrows and Upland Sandpipers. Now we started early, hoping for Yellow-breasted Chats and any miscellaneous rarities that might be hanging around Medicine Hat’s Police Point Park.

The first birds to greet us were Grey Catbirds. These thrushes are common throughout Alberta, but never before had I seen them in such large numbers.

As we proceeded along the rocky pathways, the chatter of House Wrens and Flycatchers pervaded the air, and Bald Eagles soared overhead. Breaking out from the trees, we found ourselves on a large stone beach, and flying above it a —- but it was gone so fast. I had little doubt as to the identity of this mysterious bird, a medium sized white bird with a heavy black crown, but we had to relocate it to be sure. Jogging along the waterfront, we came upon an immature Bonaparte’s Gull, a Great Blue Heron and some Spotted Sandpipers, but no tern. Then, winging it’s way along the course of the river, it reappeared at a somewhat slower pace than previously.

It didn’t stop, however, and the bird was gone before we knew it. Jubilantly returning to the car, we happened across a Yellow Warbler feeding its young, a pair of Mourning Doves and two Killdeer. A slightly different find was a small frog that sprung from a small cluster of vegetation onto the path. 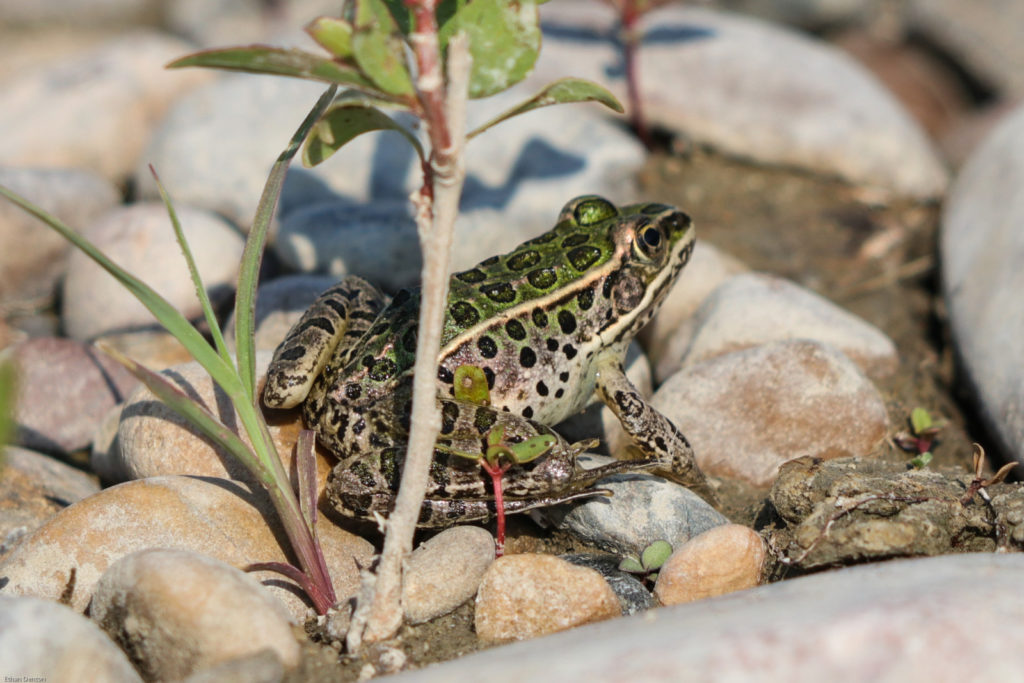 Heading north now, we were constantly watching for Burrowing Owls as well as trying to identify all the LBJs (Little Brown Jobs) on the side of the road. The Suffield area turned out to be very productive, offering up Baird’s and Grasshopper Sparrows, four Loggerhead Shrike and a Say’s Phoebe.

Now the landscape was changing, switching back to the familiar farms, scattered with trees and sloughs of the Calgary area, rather than the open and wild scrub land I had come to love in my short time in the south. Towards the hamlet of Patricia, we pulled over at a tiny pond simply heaving with birds. Half a dozen Pectoral Sandpipers, a Baird’s Sandpiper, Wilson’s Phalarope and two Least Sandpipers were pulled out, along with Avocets, Killdeer and Ring-billed Gulls. The entire wetland was about 20 feet long and 15 wide.

An hour in Dinosaur Provincial Park didn’t turn up much, but we did hear a Ring-necked Pheasant there. Cessford was another excellent shorebird location, with species such as Willet and Marbled Godwit foraging among Killdeer and Short-billed Dowitchers, and 12 Loggerhead Shrike caused comment.

The next place of note was the road running from the town of Dorothy to Drumheller, on which we found Common Nighthawk, American Kestrel and the highlights – two adult Lark Sparrows. We had seen one in the States a few years ago, and an immature already on this trip, but this was by far the best views I have ever had of these beautiful sparrows.

We spent the night in Drumheller, more than pleased with the day’s sightings, before heading out the next morning. With two more main stops left, the trip was almost over, but boy did they live up to the hype! Between Stettler and Rochon Sands, we found two Coopers Hawks, first of the year for me, and numerous Black Terns. Once at the Sands, we ate a casual lunch before heading out to the marsh where we were hoping for Great Egret and American Bittern. Fighting through the cement thick walls of mosquitoes, we were rewarded by an Egret fly-by almost before we had started! This wasn’t the only fly-by, though. Before the Egret, we had found Herons and even some White-faced Ibis flying over.

Making our way out of the bug-infested swamp,  we decided to try one of the forested pathways after scanning the big lake. There was a big island covered in birds quite a ways out, but the bigger birds were still identifiable through my scope, and it was by this that we found the biggest surprise of the trip. A few Snow Geese had started to be reported, but it was still ridiculously early, so imagine our shock when we discovered a lifer Ross’s Goose! Ross’s are smaller than Snow Geese, and pass through in comparatively tiny numbers mixed in with the huge flocks of Snows. This one was seriously early migrating, and all on its own. We were naturally delighted to see it.

This photo is closer, but worse quality due to the fact that I was digiscoping by the crude means of holding my camera up to the eye-piece of the scope.

There were also quite a few Black and Forster’s Terns, Red-necked Grebes and Pelicans.

The final Rochon Sands Rarity was an un-photographed, but easily identified, Great-crested Flycatcher. This bird had been previously reported, but was a very nice bird nonetheless. The final stop on the way home was at Ellis Bird Farm, where we found at least 100 Purple Martins, some kingbirds, warblers and American Goldfinches.

The Martins were splashing and drinking at a pond near the nest boxes, which made some interesting photos, but my favourite isn’t even of a Purple Martin!

The real target bird here was a bit silly. Having lived in Alberta all my birding life, I really should have seen a Ruby-throated Hummingbird in the province. However, in my eighth year of Alberta birding, I had yet to see one. Ellis Bird Farm seemed to be a good place for them, so we tried it and in the end, succeeded, making Ruby-throated Hummingbird the fourteenth Alberta first in the week.

That concluded the trip, and we headed back to the enclosed mountains, where I would spend the next two months sorting through the two thousand photos we had taken in three and a half days. It really was the trip of a lifetime.