We woke early on our 3rd and final day in Cley, and drove to the visitor centre to look through the scopes. There wasn’t much out there, but in the fields beside us there were 25 Curlew and a dozen Skylark!

We went back to Titchwell to see what we could. Upon arriving, an elegant Water Rail stepped out from its hiding place and we got to watch it for a while before continuing. It did not stay in the open long enough for any good photos, but here’s what there is.

After seeing very little at Titchwell, we (supposedly) went home. 20 minutes after we left, we stopped for the sight of 4 or 5 acres filled with waterfowl. European Wigeon, Brent and Canada Geese, Mallard and a few gulls.

And, was it? It was! Pink-footed Geese! 27 of them couldn’t hold the lime-light for long though, as an elusive Barnacle Goose flew overhead.

Eventually, we left, and managed to make only one more stop on the way home. We were twitching, an activity I try to keep away from when I can, but this time it was well worth it.

After a fifteen minute jog, in the failing light, we crested a hill and hit gold – that is to say, red. Thousands and thousands of Red Knots mingled with 1500 Mallards, 2000 Oystercatchers and 50 – 100 Curlew. So many Knots. It was breathtaking.

And then the light faded, and we could see nothing.

You can see my other 2 posts on Cley here:

My Mum had seen a Barn Owl. My most-hoped-for target species, seen by all of my family but the birders. That was annoying.

Cley dumped rain on us all of Wednesday, but we decided to go out anyway. As we drove down a small road in the dreary grey landscape, something lit up our hopes. Three minutes later, the pouring rain had put them out again.

We had found a beautiful little collection of birds. Pity it was a private collection. There was a Smew, Harlequin Ducks, Mandarin Ducks, Red-crested Pochard and more. It was the Wood Duck and Snow Geese that tipped us off.

The day got better when we reached Blakney Point. At first our attentions were solely on holding the scope steady in the incessant wind, but soon enough we looked at something other than the churning waves. In the fields behind us were Lapwing and something else – European Golden Plover!

We took one last look at the sea, not bothering with the scope because of the wind. Then, twisting and turning, a sea duck whizzed past, hugging the water. Long-tailed Duck!

We drove back to Cley, to go to the visitor centre, hoping to find a map. It was closed until 9:30, so we drove around looking for Stiffkey Fen, but could not find it, so we returned to the centre and waited the five minutes until it was open.

At the building, we found that we could sit inside and watch through some scopes they had there, with which we identified Brent, Shelduck, Tufted Duck and Avocet, to name a few. Eventually the rain lessened and we decided to walk out to the hides on the saltwater marshes themselves. We were hoping for Water Rail and Reed Bunting, neither of which we saw. There were, however, many Avocets, 5 types of Gull, Snipe and a Marsh Harrier.

The light was fading by now, aided by the heavy clouds, so we searched around in the car a little more, finding only a drenched Pied Wagtail to end the day.

And so ended our second day in Cley.
Stick around for the third, and final post on my trip to Cley Marshes!

I found this rare bird a week ago. This is the first time a Brown Thrasher has been reported to eBird in Banff County, so it is quite a find!

The Cats and The Birds

What happened in Cley depended almost entirely on the weather, a factor that really influenced our experience, considering that from Wednesday afternoon to Friday evening (the length of our stay), all of Thursday found torrents of water dumping out of the heavens.

Wednesday was the best day by far, on which we found 18 life birds, and others, including rarities like Red-crested Pochard, Spotted Redshank, and Common Raven. Our target species were not many, only five species were on our Cley bucket list: Barn Owl, Bearded Tit, Water Rail, European Storm-Petrel, and Smew.

We searched for the Water Rail first, but did
not find it. Next, we walked down through the marshes keeping our eyes open for Bearded Tit, Reed Bunting, and Barn Owl. Nothing. At the first lake, however, we found Shelduck, Common Redshank, Red-crested Pochard. Curlew lurked among the banks of small rivulets, while Lapwing strutted around like they owned the world – and in those numbers, maybe they did!

We ate lunch in one of the hides, sporadically scanning the lake to see if anything else was there.  Suddenly, a medium sized duck slipped off the shore and swam away, catching my attention – Common Scoter!

Continuing to the sea, we came upon a kilometer long beach, 500 meters on each side. Deciding to go left might have been the right choice, but with what we found out later, it’s hard to decide!

Hundreds of shorebirds littered the point – Oystercatchers, Dunlin, Ringed Plover. Over to the left, there were 2,000 Herring Gulls settling down for the night. to the right, a solitary Great Black-backed Gull.

Walking back, we hit upon the Marsh Harrier roost, and saw 15 of these amazing raptors retiring for the day. And, with the last ray of the sun shining on a single portion of the Marshes, it was time for the Bearded tits to make a quick appearance. Two of the made themselves obvious, a male and a female. One target species was good enough for the day.

Then we saw the most significant sighting of the day. My Mom.  We had overstayed our welcome at Titchwell.  We were losing light and it was time to move on to Cromer, where we were staying.  My family had been killing time at the RSPB lodge and was ready to move on.  But guess what they had seen?

What happens next in part 2?  Stick around! 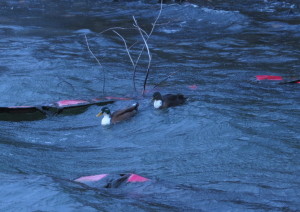 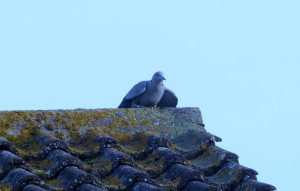 Do you have a hard to shop for birder in your family? Or just want a new series of books to read? Well here it is. I don’t want to sound like an advertiser, but this series is one of the best I have ever read.

A young Chief Inspector in a small North Norfolk town who has come by fame and (some) fortune. But what he really wants to do is go birding. Watch how the guarded Domenic Jejeune weaves his way through dangerous murders, excellent birders, and the ever present do

ubt of his team.

In the first book, A Siege of Bitterns, Jejeune has to deal with the murder of a well known ecologist known as “Marsh Man.” In the man’s notes, he finds an unusual report – Am. bittern. How does this fit into the death of Marsh Man? Leave it to Domenic Jejeune to find out.

In the second, A Pitying of Doves, two people are found dead in a bird sanctuary, locked in a cage from which a pair of doves had been stolen. Who stole the doves, and why did they

ignore the expensive jewellery on the man body? When it turns out that the Mexican Embassy is involved, Jejeune is given very strict instructions – do not even think about blaming any of them. Follow along as the entire North Norfolk police team encounters injury, shame and puzzlement throughout the whole case.

I haven’t read any of the others yet, but I am sure that I will like them, and actually understand the place more, as I’m going to North Norfolk this winter. I leave on Dec. 22 to go to the exact place that these books are based!

Good luck with the books!

Warblers, shorebirds, and others are becoming more and more evident in birding hotspots around all towns and cities these past few weeks. This, combined with the clear eclipse (should you find yourself wondering what the moon has to do with birds, click here to unlock the mystery), are sure signs of fall migration. Even in the past week, I have found unusual species in my local ponds and creeks. Here is a collection of photos that my Dad and I have taken recently.
Do you have any cool bird photos from this fall?
If so, email them to me at birdboy.ca@gmail.com, and I will be sure to post them soon.