The Albatross has long been considered an ill omen among sailors. Ironically, it is in the pursuit of these very same creatures that I come up against my own metaphorical “Albatross.” Despite multiple attempts, a pelagic trip (an oceanic birding tour) has eluded me throughout the years. Blocked by fog in Tofino, closure in Victoria, and lack of transportation on the east coast, I have somehow managed to reach my ninth year of birding without experiencing one of these trips. This, however, would all change on July 14, when we would sail out of Half-Moon Bay, California.

Up at five-thirty to drive out to the pier, where we met Alvaro Jarmarillo and the rest of the group at 6:30 AM. Filing aboard the New Captain Pete, we were met by the pleasant news that the boat was stocked with fresh coffee, biscuits and some excellent fresh strawberries. Departing the harbour in a cloud of fog, we identified the usual mix of Brown Pelicans, Heerman’s and Western Gulls. Two Marbled Murrelets – only the second time we had seen these unusual birds – floated half a mile offshore.  Murrelets oddly nest in deep forest groves, miles from the ocean, where they return to spend the majority of their lives.

The first life bird of the day came surprisingly early, and would be a common sight over the course  of the trip – Northern Fulmar! These funny little tubenoses  were never boring, coming close to the boat for photos in their array of colours, from mottled grey to chocolate brown to a pure, glistening white.

As we neared our primary destination, a pod of whales surrounded the boat – Hump-backs, Fin Whales and a small unidentified whale swam further out, but close to ten Great Blue Whales breached nearest our vessel, granting many close views of their broad backs and explosion of mist that was their breath. Having the two largest mammals in the world (Fin Whale being the other) surrounding us was an amazing experience, if a little nerve-wracking.

Approaching the islands, we were treated to our first ever views of Cassin’s Auklet. Impossible to photograph, the tiny alcids would bounce from wave to wave in increasing speed as the boat came near, before finally gaining the momentum to lift off. Eventually, however, one accepted our presence long enough for us to catch a few shots before vanishing beneath the waves.

Sooty Shearwaters skimmed the sea, and, though relatively common, rarely approached the ship.

Our day was spotted with Puffin observations, each of which was punctuated by a scream of “Puffin!” which resounded from end to end of the boat, alerting all the passengers of the nearby alcid. Once, we were lucky enough to have one fly only a few feet above the boat, and another time a pair rested contentedly as we floated within 100 metres of them. All in all, we were very fortunate with the Puffins.

My highlight came as we coasted along the continental shelf, in a heavy patch of fog.
I gazed into the distance, not expecting much, when a massive shape loomed out of the fog. It drifted towards us on silent wings, bigger than any bird I had seen before, and there was no doubting what it was. An Albatross.

The bird passed, shrouded in mist, but we would see another. Nine more, in fact. Black-footed Albatrosses were the undeniable high point of the day, and while we saw no Laysans, I was more than content with the obliging birds.

And I’d include another photo of the goliaths had it not been for another lifer, the Pink-footed Shearwater. A duo of the avians paused next to a young Albatross, presumably for a patch of food, though we observed none. As we neared their location, a Shearwater flew up, and banked past us offering excellent views of its white underwings and wide wingspan.

Returning to shore, we saw few birds other than the murres, which had shown up in their tens of thousands that day. Eventually, a pair of dark birds were spotted on the horizon, which we could only assume were gulls signifying the proximity of land. Fortunately, we were wrong. Two immature Long-tailed Jaegers zoomed away over the sea, leaving us with an adult Sabine’s Gull as the only gull we saw at any distance from shore.

On reentry unto the harbour, we identified Surfbirds and Black Turnstones, in addition to an extremely distant pair of Elegant Terns as our fourteenth, and last lifers of the pelagic trip.

Thanks for reading, and stay tuned for the final post of the trip! 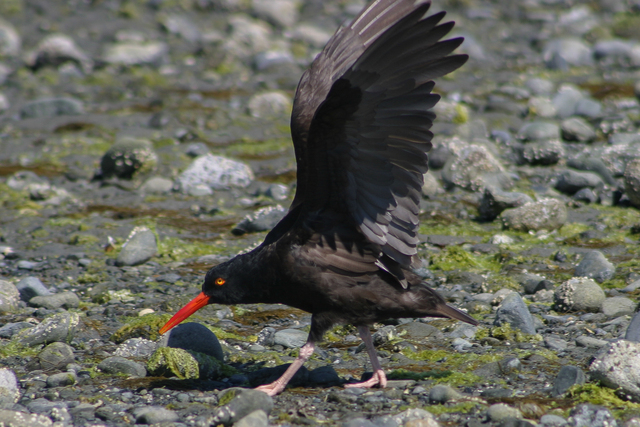 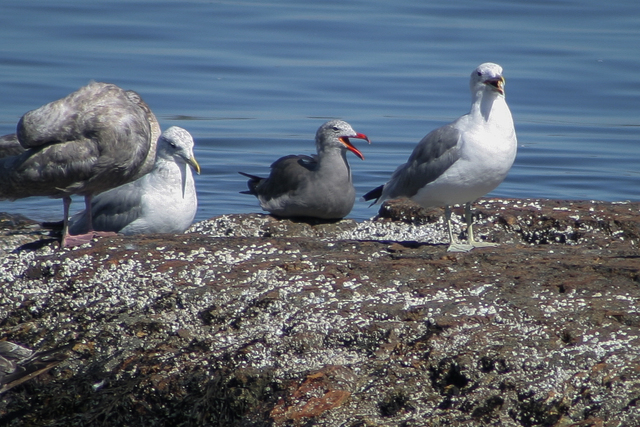