It’s New Years Day, and with a bright new year dawning, I felt it was time to look back at 2017 – events, experiences, but mainly my favourite birds and photos from the year. I hope you enjoy this collection – a bit long, but I couldn’t leave any out! 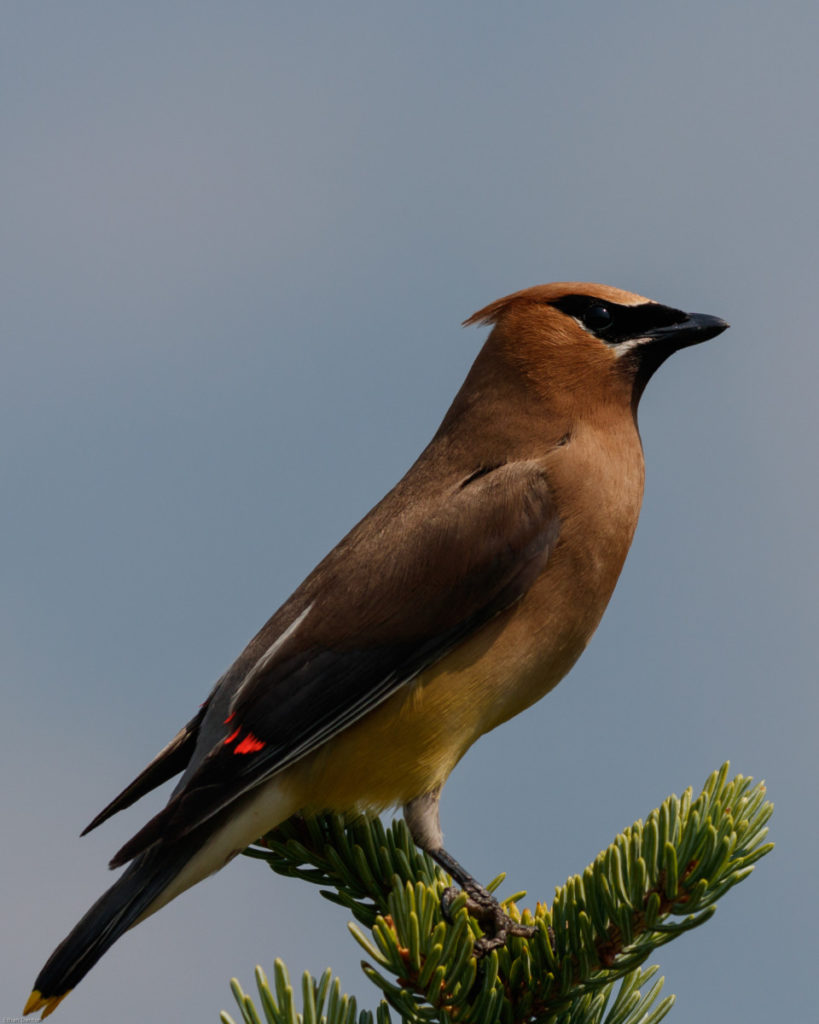 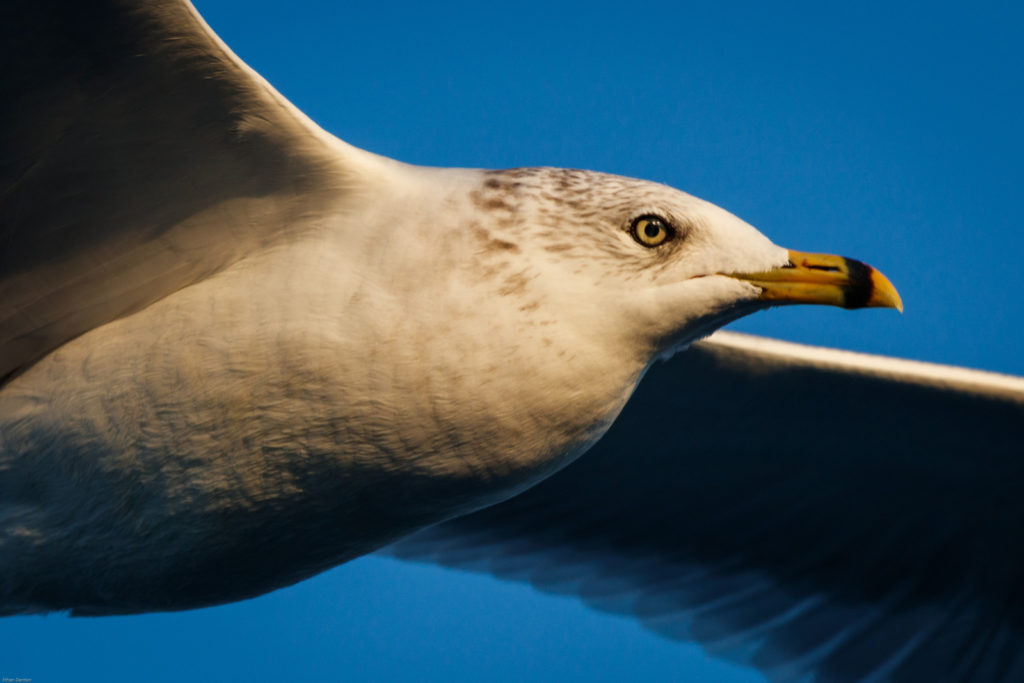 Trip of a Lifetime (Southern Alberta) 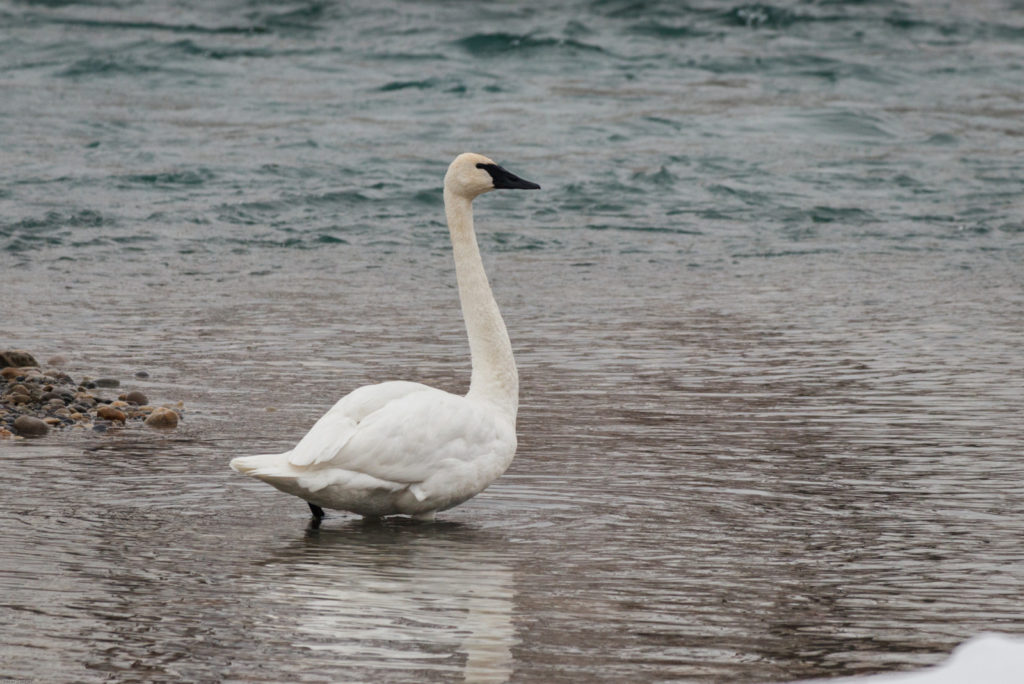 As for my favourite birding experiences? Well, the first of the year was a trip to Waterton area, followed by an amazing time with some Sharp-tailed Grouse in April. The Great Canadian Birdathon (part one and part two) was great as usual, and the “Trip of a Lifetime” (parts one and two) lived up to its name. Ontario was fun if not particularly productive, and this year’s Canmore Christmas Bird Count was miles above that of 2016. All in all, 2017 was a stunning year, but with hopeful thoughts of Long Point, Southern Alberta (again!), and maybe even California, 2018 promises to excite. Here’s to the New Year!

It was perhaps the most uneventful trip to Ontario to date, in terms of birds. Previous visits have resulted in sights such as breeding Prothonotary Warbler, Green Heron and Bobolink. This time, however, we were not headed anywhere like Long Point, or even as far as Toronto. While this did not prevent us from seeing some good birds, it did mean that we wouldn’t be watching Blue-winged Warblers and Scarlet Tanagers.

We arrived in Ottawa airport at 11:00 PM eastern time, sleeping at last at around two AM. This late night arrival gave my Dad and I the opportunity to slip out to a nature preserve while the others slept in the following morning. The South access was barren, with naught but a Turkey Vulture seen, but the North was more productive – 25 species in a couple of hours.  Standout performers included four Blue-headed Vireos, an Eastern Towhee, some Eastern Pheobes and a Rusty Blackbird.

The next few days were spent in Maitland and Brockville. Cormorants and Ring-billed Gulls remained prominent throughout, but species such as Grey Catbird and Lincoln’s Sparrow mixed among Northern Cardinals and ubiquitous Blue Jays to exhibit a dazzling spectrum of colours. Hooded and Common Mergansers swam with the Mallards in the river, while Turkey Vultures wheeled above.

There was, all in all, a good variety of birds. While the weather did not co-operate, Red-winged Blackbirds, White-breasted Nuthatches and Black-capped Chickadees were all quite cheerful, presenting themselves in numbers throughout the trip.

One of the biggest highlights of the time in Ontario was a boat tour of the Thousand Islands. The first bird ended up being the best – a mature Great Black-backed Gull! Not a lifer, but a Canada first and a very nice bird to see.

Over the course of the trip, we would see three more of these impressive birds, but the above photo is by far the best view we had of one. Thousands of Double-crested Cormorants swarmed the rocks, buoys, islands and houses while Mallards and Canada Geese littered the blue waters. I spotted a few American Black Ducks, Common Loons and Common Mergansers, but the best waterfowl of the day was a small group of six Red-breasted Mergansers flying past the ship.

Returning in the evening light, a flock of maybe fifty Ring-billed Gulls accompanied the boat, floating on the air thrown up, effortlessly keeping pace with us almost all the way back to the docks. Naturally, I took some photos, as they were keeping beside and slightly above us, providing many excellent opportunities. My favourite shot, however, comes from when one dipped down to the second level, and I took one from above it.

Later in the evening, they became much more bold, and even landed on the moving watercraft just a few yards away from people.

Two days later, we drove out to Arnprior, to visit a friend who’d moved from Canmore; incidentally the very same who began this site for me! On the way, we breezed by Wild Turkeys, wild Turkey Vultures, and even possible Eastern Meadowlarks – what would have been lifers, if we had stopped to confirm them. Once there, a walk around the town centre turned out the first Dark-eyed Junco of the trip, more Herring and Ring-billed Gulls and some European Starlings – dazzling birds in the right light.

Friday morning, back in Brockville, we headed out on a non-birding expedition which nonetheless proved fruitful – so much so that we went back to the same place two days later. On both journeys, the abundance of White-throated Sparrows and icterids (blackbirds) surprised us, with over 40 individual sparrows identified. The second time, a Mourning Warbler shone out, partnering with another Blue-headed Vireo as the stars of the show.

On our last day in Ontario, we visited Brockville’s most famous sight – the Brockville Railway Tunnel – an older tunnel that has been transformed to a tourist attraction – complete with loud, trashy music, no less. Still, the sight was cool, and they had excellent lighting features.

And that concluded our trip to Ontario! We boarded the plane that night, and left the land of warmth and warblers for the snow and cold of a Bow Valley October. Thanks for reading! 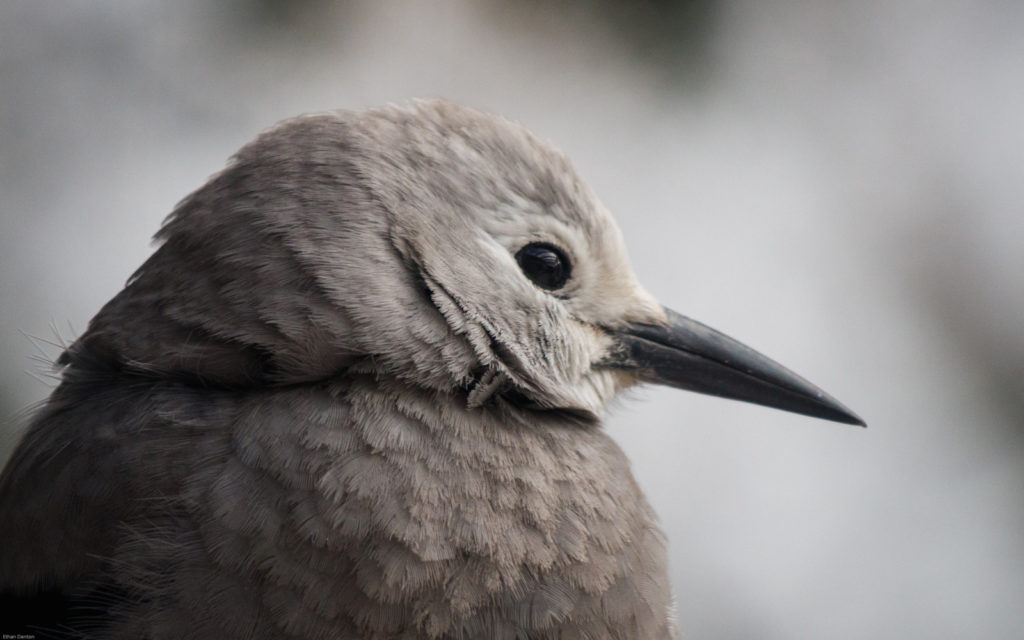 This week, I’ve been spoiled for choice for a FoF photo, due to the extravagance of the birds at my feeders. How to remedy  this? Simply post three. The first is an inquisitive Clark’s Nutcracker, the second a Black-capped Chickadee and the third is a Black-billed Magpie trying to get a grip on a suet cage. Hope you enjoy them! 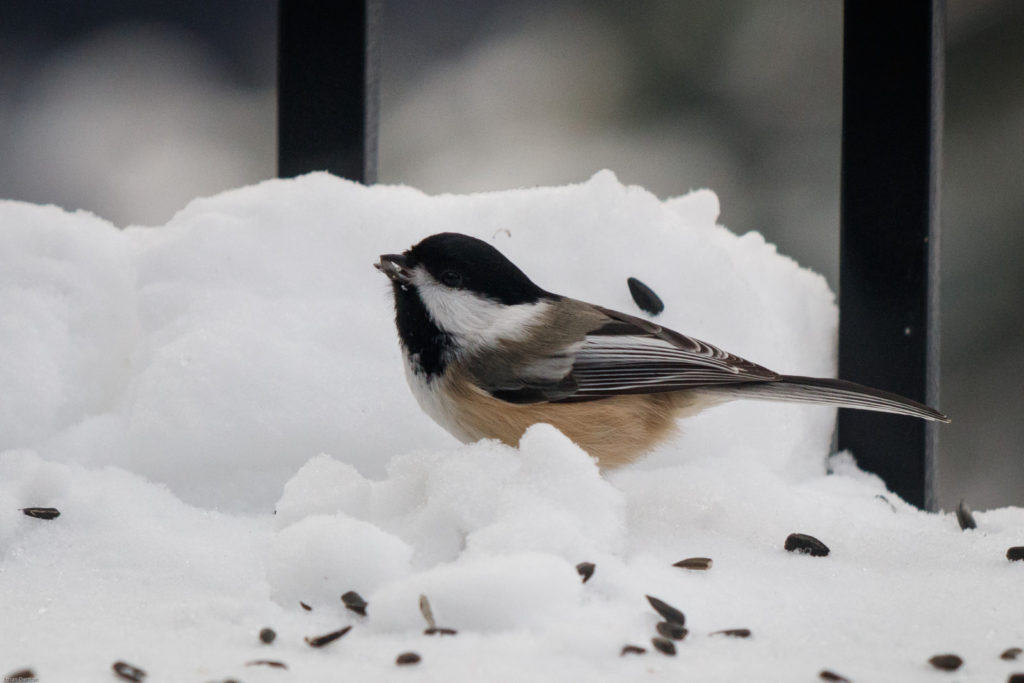 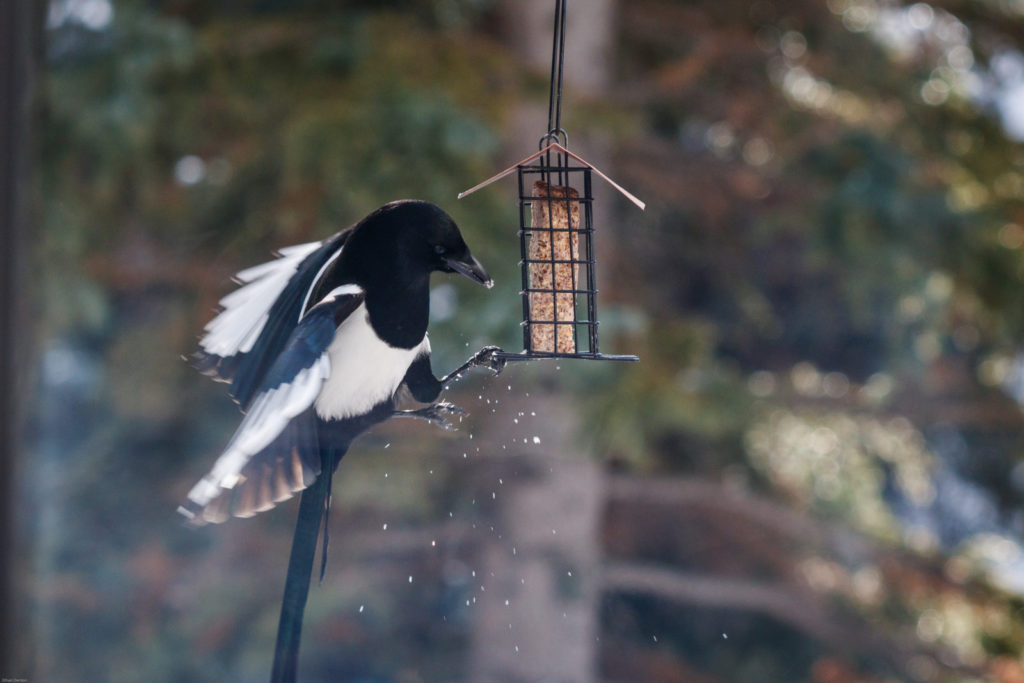 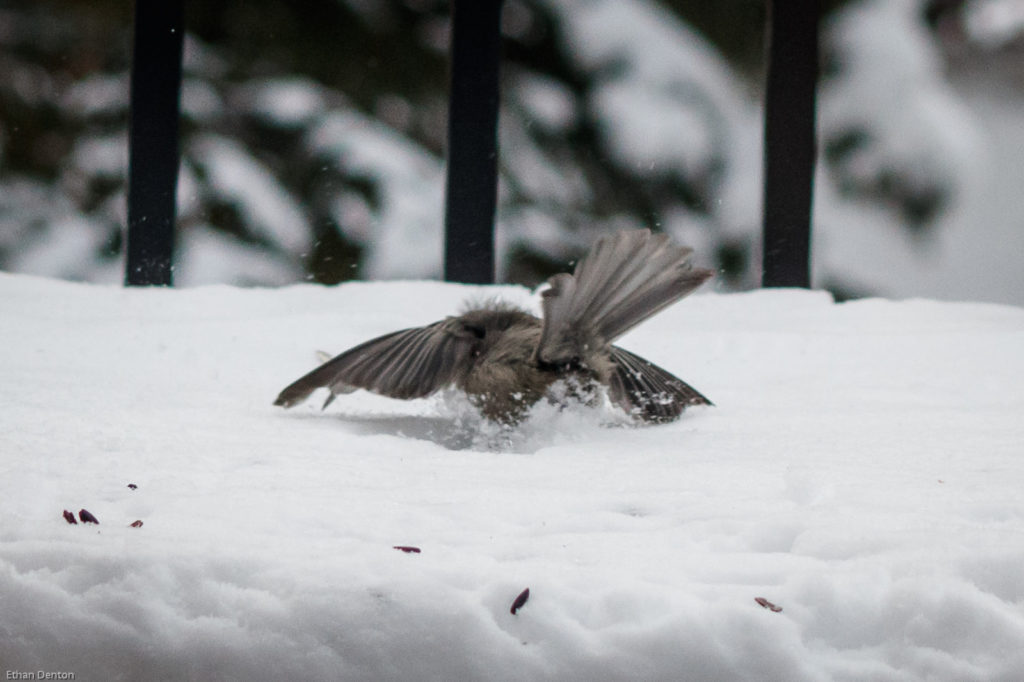 Here’s an interesting  shot from my feeders in the last couple of days –  the bird was pusued by another, and ended up bouncing off the surface of the snow in the midst of the chase! Last week’s unidentified bird was a Spotted Sandpiper chick. Can you guess this one?

Other What Bird Wednesdays:

Ten days ago today,  the team Saw-it Owls was kicking off their Great Canadian Birdathon. Starting at a Purple Martin colony in Chestermere, we headed to Weed Lake, then down to Carburn Park. We were starting at the Martin colony because, for the first time in my memory, the Peregrine Falcons were not nesting at the University. With two scopes, three cameras and four pair of binoculars, we set out. Purple Martins are not hard to find at their homes, and we were not disappointed, with nine individuals showing for us.

Weed Lake is usually a very good place for shorebirds, but the water levels are high this spring, and we only identified the disappointing tally of 3 shorebirds not seen anywhere else. Black-bellied Plovers were the highlights, but a Black-crowned Night-Heron flyover was a nice accompaniment to a conservative estimate of 5000 Franklin’s Gulls, among which rested a single Bonaparte’s Gull.

Carburn Park was a good stop, throwing up a California Gull, American White Pelican and House Wrens. We also saw Western Wood-Pewees, a Belted Kingfisher and three Bank Swallows. It was a good thing too, as South Glenmore Park was barren of birds, excepting some out on the reservoir.

Heading out of the city, we took a short stop where someone had seen a Golden-crowned Sparrow recently. We missed the sparrow, but there was a lucky Western Tanager and a Tennessee Warbler.

We dined in Cochrane, then headed out to Horse Creek Road Marshes. Sometimes tough to find, these marshes are a brilliantly consistent place for Yellow Rails, of which we heard 3. Nelson’s Sparrows were absent, but the buzzy call of a Le Conte’s Sparrow rang out three times. We of course, were 12 hours too early for the Sedge Wren reported there the next day.

That pretty much ended the first half of the 24 hours, as we saw little on the return drive via Sibbald Creek Trail. That is also the end of this post, but stay tuned for the second half from Saturday in the Bow Valley! There is still time to donate to this important cause, so please click this link to see my Birdathon page. Thank you!

The second of my bi-monthly Spring Bird Walks on Policeman’s Creek started at 7:30 AM on Sunday May 21st, the day after the second half of the Great Canadian Birdathon. The sun was long up, and the day was turning out to be pleasantly warm. 21 participants correlated with the date, and was a large enough number to split into two groups, one headed upstream to the Spurline Trail, and the other moving downstream to the Great-horned Owl nest.

If you don’t know where it is, the nest is quite well hidden. There have been many new birds coming in since the last walk, including Spotted Sandpipers, Sora and Yellow Warblers, and between the two groups we totalled 38 species. Coming so soon after the Birdathon, I was more than a little tired, which is why my post is out so late – I slept until 9:30 today, and replacing the deck is a time consuming job. Before the walk had even started, we heard Song Sparrow, Red-winged Blackbird and White-crowned Sparrow among others, all species we would go on to see.

The group headed to Spurline did well, seeing three Clark’s Nutcrackers and a Solitary Sandpiper, while the downstream crew got good views of the four visible owls, Yellow Warblers, Lincoln’s Sparrows and Violet-green Swallows. Rare for the area was a pair of Common Grackles seen after most people had departed.

The eBird checklist is here, for anybody interested. If anyone wants to come out to our next walk, it is on June 4th at 7:30 AM (meet at 7:15) at the Big Head on Canmore’s main or 8th Street. See you then!

Banff Community Bird Walks are a well known series of Saturday morning walks led at the Cave and Basin in Banff. They are free to attend, and participant may see anywhere between 20 and 40 species, depending on the time of year. It came as a great surprise to me, therefore, to learn (when I started birding) that there were no similar events run in Canmore, where 25-30 species is a regular count for me in an hour.

So I have started the Canmore Spring Bird Walks, led every other Sunday morning (so people can still attend the Banff one) from 7:30 – 9:30 am. My local hotspot, the Canmore Boardwalk, is very productive, and has this year alone turned up such rarities as an Eastern Pheobe on April 7th and a Hammond’s Flycatcher on April 26th. It has 114 species seen one it, (of which I have seen 104) and continues to show more every year.

The first Canmore Bird Walk was yesterday, May 7th. I woke up to the ever unpleasent presence of a Rockies spring snow – heavy, cold, and above all, wet. Despairing for participants, I pulled on my heavy coat and tried unsuccesfully to protect my brand new camera and lense from the ferocious weather (at the end of the day, I would rejoice in the fact that I had chosen the Canon EOS 80D, as its excellent weather-proofing proved invaluable). As it turned out, my worrying was unjustified, with 8 people coming out that morning to see the Boardwalk’s first ever Solitary Sandpiper, and the largest flock of warblers I have ever seen – over 200 Yellow-rumped Warblers swarmed one section.

Other highlights included a male Blue-winged Teal, Chipping Sparrow, and a Great-horned Owl. All in all, it went well, and hopefully on our next walk we will have considerably better weather. By then we can expect Yellowthroats, Yellow Warblers, and Soras to be back in force. Thanks to everybody who came out yesterday, and I hope to see anyone who’s interested on May 21st, 7:20 at Canmore’s famous Big Head.