The third edition of Canmore Spring Bird Walks began quietly, oddly lacking the usual morning chorus. This would be the theme of the first half of the walk, in which we saw and heard little apart from American Robins, Lincoln’s Sparrows and Red-winged Blackbirds. Once we got to the backside of the creek, however, that changed.

A slow paced musical trill reverberated across the marsh, as participants got serenaded by a relative rarity, the charismatic Swamp Sparrow. The Harlequin Ducks have departed for faster mountain streams in which to breed, but a female Northern Pintail made a fly-by appearance.

Strolling back via the boardwalk, we were treated to excellent views of Yellow Warbler, Lincoln’s Sparrows and this male Common Yellowthroat.

Towards the conclusion of the walk, we relocated the Swamp Sparrow, along with Song Sparrow and juvenile Mallards. The really special birds didn’t come until the final fleeting moments of the walk, though. As the group began to dissipate, a Calliope Hummingbird hovered mere feet from the Big Head statue, and a female Yellow-headed Blackbird perched on the Main Street bridge.

This is the first time a Yellow-headed Blackbird has been reported to eBird here, but I know that I saw one many years back, on Policeman’s Creek. If anyone wants to see the full list for the day, click here for my checklist. I hope to see everybody out next time, on June 10th. By then, most of our birds should have arrived, and we’ll be looking for birds like last year’s vagrant Bullock’s Oriole. On Policeman’s Creek, there’s always a good chance for unusual individuals!

Eight people made their way to the walk on this fine spring morning in Canmore. We started early, heading down the boardwalk and then back via the Mallard Pond overlook, catching a total of 27 species. Yellow Warblers are still yet to arrive, but the first Sora of the year whinnied from the reeds, and a plethora of sparrows buzzed and whistled across the marsh.

The real highlights, however, were the many blackbirds. Brown-headed Cowbirds fluted their notes above, while the “Ko-kaaachunk!” of the Red-winged Blackbird reverberated around the creek. Also present were Brewer’s Blackbirds setting up their territories, and a lone Common Grackle flew over towards the end of the walk.

For those who want to see the full list, click here. I hope to see you all out for our next walk, on May 27th at 7:15! By then, we can expect a good many more species, including the likes of Yellow Warbler and American Redstarts.

Sorry for not posting in a while – I’ve been busy with school and sports, but that should be cooling down for a few weeks before my final exams, so I should be posting more soon.

As more and more birds stream into the province, the annual assortment of birding events, festivals and counts begins. Already, the Global Big Day has been and gone, with 6,098 species reported by over 28 thousand observers on May 5th. One of the biggest events yet to come (at least for me) is the Great Canadian Birdathon. This will be my 6th birdathon, and my 2nd as part of the Saw-it Owls team. I’ll be joining up with Gavin McKinnon of Calgary once more, searching for roughly 125 species in Southern Alberta. While we failed to reach that target last year (112 species), we have high hopes and a completely different route this May, hitting some of the best habitat in Alberta.

For those who don’t know what the birdathon is, it’s a fundraiser run by Bird Studies Canada with intent to protect our birds and preserve their habitat. Participants accept donations either as flat amounts (e.g. $25) or by a per-species gift (e.g. $1 for every species found). Then, we choose one 24 hour period in the month of May to go out and find the most bird species possible. It’s always been a great time, and all for a worthy cause.

Anybody interested in helping out with the fundraiser can go here to donate, or sign up through the Bird Studies Canada Birdathon Page. Thank you everyone who has donated already, and if you haven’t, consider joining the cool crowd by doing so, to keep our backyard beauties in fine feather! 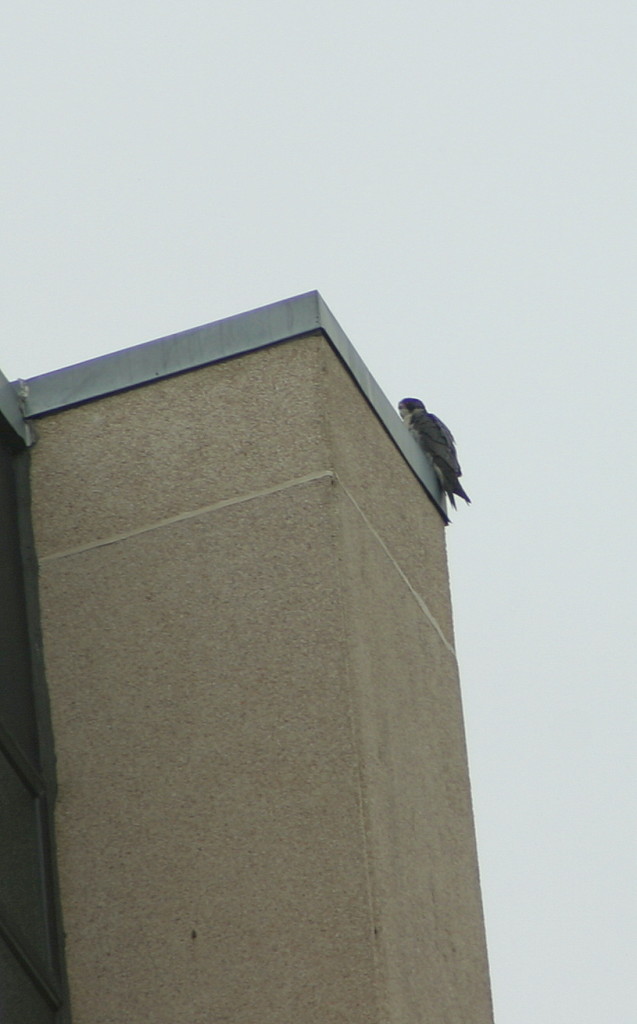 See the posts for these years here:

It was a cold, wet kickoff for the Canmore Spring Bird Walks this year, but well worth being out! In the early morning chill, a Great Blue Heron flapped across the boardwalk, where Song Sparrows, Yellow-rumped Warblers and some newly arrived Lincoln’s Sparrows burbled out their cheerful melodies.

Four American Pipits feeding amongst the rocks in the big pond were nice, and almost made it as the highlights of the day. Sadly, we missed the Sora which came in on Friday, but towards the end of the walk we ran into a large mixed flock of White-crowned Sparrows, Lincoln’s Sparrows, Ruby-crowned Kinglets and Song Sparrows. Scanning the flock for Orange-crowned Warblers, a loud, harsh “Veeeeer” rent the air behind us. Warbling Vireo! This bird is the first reported in Alberta this year. I unfortunatly failed to procure any photos, but there is no doubt about the identification.

The usual mix of starlings, chickadees and robins rounded off the trip, but the Vireo took the cake. May this be a lesson to you who chickened out because of the rain – twice the first walk has been in poor weather, and twice it has turned up great birds (See May 7th 2017).  I hope to see you out for the next walk on May 13, rain or shine!